Hey, On time in Beaufort, NC

So I'm getting at least one post up while I'm still in the area.

We arrived in Beaufort, pronounced Bofert, on July 9th at around 6:pm. We had a nice sail from Charleston, SC. The wind was good to us but still had to motor more than we like. We came into the Beaufort channel on an incoming tide. A real fast incoming tide. Mind you, we don't do fast. Our average speed is around 5 knots. We were coming up to a very narrow channel entry at almost 8 knots with breakers on both sides of the entry. I chickened out!!  I went back into the main harbor entrance and started back out. With tides against us we were doing a wopping 2 knots. Called Boat US to get some "local knowlege" and they said "Oh yea, you can go in there!" Yea right. I took a deep breath, realigned on the cut, and went in. Not graceful but I went in. You never now how out of control is until you shoot through a cut barely big enough for your boat, going almost twice as fast as you normally go, and at about a 15 degree angle off of going straight since the tide is definately in control. It's really hard to hold your breath that long!! Made it in and thankfully, we will leave by another route. We're going to the Chesapeake by way of the ICW and will be motoring the rest of the way to Norfolk, VA. For now, we are enjoying Beaufort. As seems to be the usual pattern, we plan on a one day stay someplace and it ends up a three day stay. Had to go see the great Maritime/ Blackbeard Museum. They have a great wood boat building shop next door all run by volunteers. So tomorrow we'll be heading up the ICW to avoid Cape Hatteras and should be in to Norfolk in a week or so. I'll let you know how that goes.
Posted by Moonshine Sailor at 9:50 PM No comments:

Woke up this Morning

Man, time goes by so fast out here. I finally realized I haven't posted in almost a month. Wow! We are now located in Beautiful Charleston, South Carolina. Lots of history here. It's also HOT! We sailed into here on June 2nd under trying cercumstances. We had heavy seas following us right in between the break walls and as we turned in following a couple of shrimp boats, we spotted a container ship coming over the horizon and one starting out of Charleston Harbor. For those who don't know, CONTAINER SHIPS ARE HUGE!!! The shrimp boat pulled off to the side so we thought he must know something we don't. Of course, it was the right thing to do. A few minutes later the two ships passed right in front of us, and they were moving. We pulled out following the shrimper and when we came to the container wakes, we went over the first and submarined into the second. YeeeeHa!!. After we got into the harbor we went to port and anchored in a nice cove that was just south west of Fort Sumter. It was great. The anchorage had great holding as we found out when a big storm came through in the night. It really blew but we were quite comfortable. In the morning of the 3rd we motored around Charleston Harbor. It was amazing coming into the harbor,it felt like the 1800's. All the historic building and church steeples in the distance. The  huge modern bridges in the background do distract a bit. After our little motor tour ,we travelled up Cooper River a couple of miles to the Cooper River Marina. This is not in the heart of things, but is comparativly inexpensive and really secure. It lies in between some off loading tanker depots and the Old Naval Base which is now a training facility for Homeland Security. Not an easy place to get to by road.
After we arrived and got secured at the docks we took the train back to St. Petersburg, Fl to pick up our car so we could have it on the east coast. It was a wonderful time on the train. Watch the countryside go by and had lunch in the dinning car, etc. It was Shanes first time on a train. We had time while in St. Pete to pick up a few supplies not available everywhere and visit friends there. Always fun visiting St. Pete.
Driving back to Charleston we went by way of the Blue Ridge Mtns to see if we could invest in some property up that way. Beautiful area but a bit pricey. Still looking at properties in the Charleston area though. 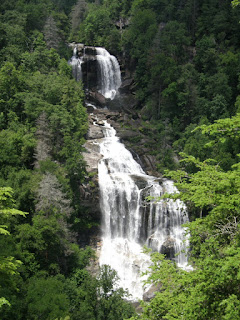 We've stayed here about a month now. Shane has been able to catch up on some school work, meet new friends and have some free time to be on land. Christie has caught up on some of her sewing projects and reevaluated some of the things she brought to the boat. Unneeded or unused thing will be left in the car or trailer to see if maybe she could use them later. My self........I can't even seem to keep up on the blog post. :-)  I have gotten some thing done, like, Refinish the bright work (wood work) in the cockpit area. In an Island Packet, that's a lot of wood! I also respliced some lines, change an anchor chain and rode and ran a remote VHF to the helm. In all I seemed to keep busy in all the summer heat we've had here lately. The last four days have cooled off some and has been pretty pleasant here. So as usual I catch up on the blog about the time we sail off to another area. We are leaving today to sail to Cape Fear and then to Morhead City, NC. From Morhead City we will go up the ICW to the Chesepeake Bay and to points north. We will be somewhere in the Bay till the Annapolis Boat Show and then we'll head south to the Bahamas for the winter. I'll really, really try to keep up on this blog better.
Fair Winds to all 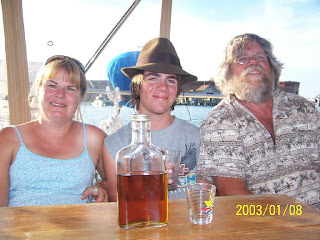 Posted by Moonshine Sailor at 9:46 AM No comments: