Finally on our way

I'm back. I would liked to keep up on this blog for history and your enjoyment. I hope to post on here on a more regular basis. 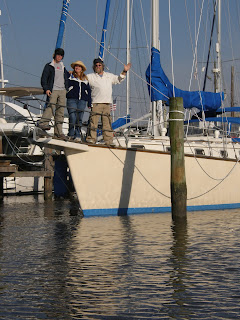 We finally found a boat to buy. It's a 1990 Island Packet 38, hull #114. We bought it in Mobile, Alabama. We had a survey done on her just before Hurricane Ida made landfall at Mobile. For some reason the marina didn't want us to own a boat that the insurance company wouldn't insure!!?? We were allowed to purchase about a week later. After that we stayed in the Mobile area around 6 weeks to do a small refit. We changed most of the running rigging, anchors, sacraficial cloth ect. I built shelves in the cockpit locker as the locker is so huge that everything you put in ends up in a pile in the forward end. It was getting colder by the day and we really wanted to get on south.
On a side note: We are so grateful to know Mark and Susan Simpson, in Mobile. They so kindly allowed us to stay at their home as often as we wanted/ needed to. We even got into watching "Survivor Samoa". It became a weekly event.  And while mentioning the Simpson Family, we were very fortunate to also know Scott Simpson, who let us stay on his Hunter 43 while we were shopping for our boat.
So off we go, with our new (to us) boat and went to the fuel dock. An adventure all it's own. Did I mention that this fuel dock stop was because we ran out of fuel during our sea trial. Had to sail into a fuel dock with 15 to 20 knot winds off the stern quarter. That was up the river. The sea trial out on Mobile Bay was very exciting with 30 knot sustained winds. This was linked to a family that had absolutely no experience with an Island Packet to start with. Yeeee ha!!
Anyway, back to our travels. We managed to cross Mobile Bay that day and anchored outside the entrance to the ICW. This section is known for it's narrow channels and barge traffic. We were mostly concerned with the barges. Heard them coming out of the channel most of the night. To our surprise we never passed a barge all the way to Pensacola the next day. It was a nice cruise along the "Alabama canal". As we came into Florida we were greeted by two dolphins that swam with us for a ways. We figure that they simply weren't allowed into Alabama for some reason. :-)  We anchored in the Big Lagoon, south west of Pensacola. It was pretty rolly that night. We drug anchor around 2:am and got washed up into the shallows.  Bouncing along the bottom has a way of waking one up right quick!!  The next morning was our well planned out weather window to cross the Gulf of Mexico......Yea Right!  It wasn't reeeeeeeeal bad but bad enough that 80 miles out and 20 hrs. of rough travel made us decide to hole up at Apalachicola for a while.  Now mind you that Apalachicola is 50 miles east of us. By sailboat that equates to 10 hours of travel, in rough seas, at best.  Well what to our surprise, the winds shift to the NW and built in front of an unpredicted storm. We're now quartering across 8 to 10 footers that were at 6 sec. intervals. That means short deep troughs. Can you say submarine?? When what should happen........we loose our engine!!!  So while Mom and Dad are down below trying to figure out what to do about the engine, Shane calls down and says, "This is a sailboat ya know".  Duh! So Shane, single handedly set the genoa and started sailing on a 90 degree easterly course. So I hollered up and said " Keep going, that will take us back toward Apalachicola."  So that's how we ended up anchored off Cape San Blas, Florida, working on our engine.
I'll pick up on our story in a little bit.  Be patient with me.
Posted by Moonshine Sailor at 3:39 PM