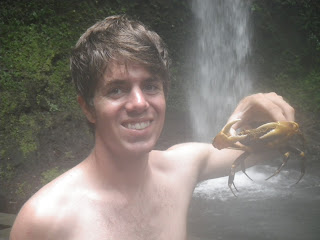 Hello from Dominica. We have spent almost two weeks here on the island and have not seen hardly any of it. We did a group tour with some cruiser friends and had a great time, We went around the north one third of the island. Visited an area that had several waterfalls with not too long of a hike. The water was very refreshing. The island is very scenic with lots of spectacular ocean views. Shane and I have been exploring a lot around Ft. Shirley on the north west side of the island which is also near our boat. There are many old ruins in the area from the British occupation of the area and also some French ruins from the  time that they were briefly in control of the island. We have found cannons out in the wood were you wouldn't think they would be and also many shards of wine bottles and plates. We found a couple of cannon balls near a cave that we think could have been used as an armory. The locals don't seem to set much store with the forts history and much has been lost as to what was used for what. The restorations that have been done are wonderful and very nicely constructed but there isn't much as to interpretation of what and how the area was used. Shane and I probably know as much as anyone in the area after our 5 trip wandering around the area. 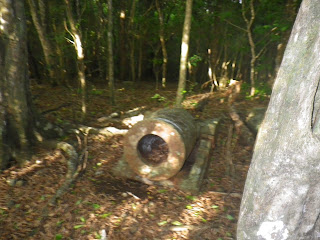 We have also been enjoying all the local flavor. We took the bus down to Roseau two days ago and  visited a restored fort in that area and walk the town to get pictures of some historic churches and neighborhoods. There is a pretty big market there so stopped to get some fruits a vegetables before going back to the boat. It was quite a long bus ride. The good part is that the Chinese for some reason have invested  into the infrastructure of the island and have built a very nice road the length of the island. On Sunday evenings the boat guys that manage the anchorage here put together a cook out for any 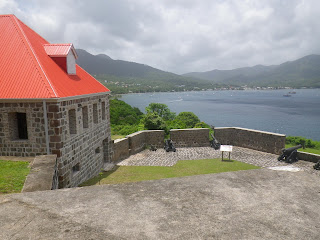 of the cruisers that wish to attend. It's a great way for the boat guys to make a little extra money and it provide a great way for cruisers to get together and meet one another or visit with old friends. Either way it's a fun gathering.
Posted by Moonshine Sailor at 10:10 AM